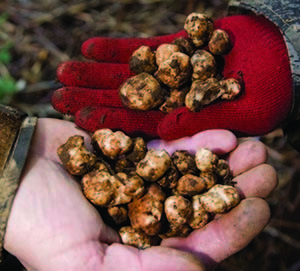 The premiere celebration of native truffles in the U.S. will host Harold McGee and Dave Arnold during the festival which runs from January 20-29, 2017

Eugene, Ore.  — The Oregon Truffle Festival returns to the Willamette Valley over two weekends this winter, with an exciting schedule of dinners, educational seminars, hands-on activities, truffle hunts and tastings. The renowned wintertime culinary festival kicks off on the weekend of January 20-22 in Newberg and McMinnville, in the heart of Oregon’s Wine Country. During the first  weekend, the festival will host Harold McGee, food science scholar, former New York Times columnist and author of On Food & Cooking: The Science & Lore of the Kitchen, which has influenced some of the world’s greatest chefs, along with Dave Arnold, the visionary behind the Museum of Food and Drink, James Beard Award-winning author and educator.

McGee and Arnold will give a presentation on Oregon truffles, followed by a panel discussion with Oregon Truffle Festival co-founder and truffle expert Dr. Charles Lefevre of New World Truffieres, and the festival’s Culinary Director Charles Ruff. The discussion will be moderated by Peter Meehan, Editorial Director of Lucky Peach magazine. The Newberg/McMinnville weekend will also include events featuring wine and truffle pairings, and an opportunity for festival goers to follow truffle dogs on the hunt, and learn truffle cooking and wine pairing techniques from esteemed chefs and winemakers.

Tickets for the 12th annual Oregon Truffle Festival will go on sale on the Oregon Truffle Festival website on September 1st, 2016, when the full chef lineup will be announced. In years past, some of the West Coast’s finest chefs such as Vitaly Paley (Paley’s Place, Portland), Matthew Accarrino (SPQR, San Francisco) Naomi Pomeroy (Beast, Portland), Hiro Sone (Terra, St. Helena) and Jackie Kai Ellis (Beaucoup Bakery, Vancouver, B.C.) have cooked at the festival, and this year promises another all-star lineup.

The Eugene events begin on January 26th with the 3rd annual Joriad™ Truffle Dog Championship, where spectators cheer for teams of truffle dogs and trainers as they race to search for hidden truffle-scented targets. Then from January 27-29, 2017, the Eugene portion of the festival brings the focus to the scientific and agricultural aspects of the developing Pacific Northwest truffle industry, both cultivated and wild. The Eugene events include the annual Truffle Growers Forum, drawing industry experts from around the world, along with two days of truffle dog training, winery luncheons, a truffle marketplace, the iconic Grand Truffle Dinner and other culinary events.

About The Oregon Truffle Festival

The Oregon Truffle Festival is North America’s premier event for truffle appreciation and education. Held every January in the Willamette Valley, it attracts thousands of culinary travelers, chefs, growers, dog trainers, scientists and journalists from all over the globe for a series of dynamic and participatory events. The festival was founded in 2006 by renowned mycologist Dr. Charles K. Lefevre and his wife, Leslie Scott. Dr. Lefevre is also the founder of New World Truffieres, a company specializing in truffle cultivation. Both organizations are run in partnership with Culinary Director Charles Ruff. Now in its 12th year, the Oregon Truffle Festival will be held in Newberg from January 20-22, and Eugene from January 26-29, 2017. The 3rd annual Joriad™ Truffle Dog Championship, where spectators cheer-on teams of truffle dogs and trainers as they race to search for hidden truffle-scented targets, will take place on January 26th. The Joriad™ is just one of many events throughout the festival that allow attendees a fascinating glimpse into the world of truffles and truffle hunting. Learn more at OregonTruffleFestival.com. Follow the Oregon Truffle Festival on Facebook, Instagram @orufflefest, and Twitter @ORTruffleFest for updates.