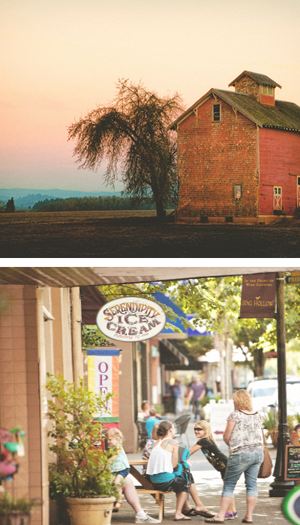 It’s time for a history lesson and everything else you ever wanted to know about McMinnville, Oregon.

McMinnville’s history dates to the 1840s, when the region of the country became known as the Oregon Territory. McMinnville, the seat of Yamhill County, was one of Oregon’s first official counties, founded in 1843. The native residents of the area were members of the Kalapooia tribe family. By the end of the decade there were about 2,000 immigrants in the area, though many left in 1849 during the gold rush.

William T. Newby, a traveler in the Great Migration from the eastern part of the country, claimed land in what would become McMinnville. He built a mill on the future site of Third Street and platted the city in 1855. He named it McMinnville after his hometown in Tennessee. The town was incorporated 20 years later and became an official city in 1882. Four years later, it took the distinction of county seat from Lafayette.

Growing into a City

In the ensuing years, McMinnville grew to become the largest city in Yamhill County. Linfield University, which had been founded in 1858, dedicated its first building 1883. The historical buildings that line charming Third Street and nearby blocks were erected mainly between 1890 and 1912.

As an agricultural center, McMinnville attracted businesses and residents who worked in that industry. Although it is known today for being surrounded by vineyards, that is a fairly recent development. Grapevines weren’t routinely planted in the area until the 1970s.

In the 21st Century, McMinnville is a thriving city of about 33,000 residents. The median age is 34, and about one-third of the households are families with children living at home. The median family income was $44,013 in the 2010 Census.

The climate in the region is considered moderate. The highs don’t routinely top 90 F, and there usually aren’t many winter days below 35 F. There is an average of 42 inches of rain each year. McMinnville is an attractive city for visitors and boasts several organizations that seek to educate guests about the history, heritage and appeal of the city.