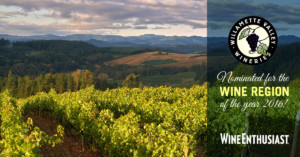 Portland, Ore. – Just over fifty years ago, David Lett, founder of The Eyrie Vineyards, planted the Willamette Valley’s first Pinot noir. Others soon joined the quest, giving rise to an entire wine industry known for its world-class Pinot noir and inviting hospitality. Days ago, the Wine Enthusiast confirmed the region’s place on the world wine stage by nominating the Willamette Valley as a “2016 Region of the Year” for their esteemed Wine Star Awards.

The Wine Star Awards are viewed as some of the most influential in the wine industry. Each year since 2000, the editors of Wine Enthusiast recognize and celebrate individuals, companies and regions that have made exceptional achievements and contributions in the wine world. Wine Enthusiast will announce the winner on November 8th, and the Wine Star Awards gala will be held on January 30th in Miami, FL.

“In the years since the first planting of Pinot noir, Willamette Valley wines have wowed critics, lured tourists and tempted winemakers to pack up and move to Oregon in their quest for perfect Pinot,” said Sue Horstmann, Executive Director of the Willamette Valley Wineries Association. “Our region is now the epicenter of Oregon’s multi-billion dollar per year wine industry with more than 500 wineries. And in many ways, it’s just getting started. We’re so grateful to be nominated. A recognition of this magnitude is as equally humbling as it is empowering.”

Other nominees for Wine Region of the Year include Champagne, France; Crete, Greece; Sonoma County, California and Provence, France.

About the Willamette Valley: The Willamette Valley, Oregon’s leading wine region, has over two-thirds of the state’s wineries and vineyards and is home to more than 500 wineries. It is recognized as one of the finest Pinot noir producing areas in the world. Other cool-climate varieties such as Pinot gris, Pinot blanc, Chardonnay, Riesling and Gewürztraminer are equally at home in the valley.

Nestled between Oregon’s Cascade Mountains and the Coastal Range, Willamette Valley’s terrain is varied and huge – more than 100 miles long and spanning 60 miles at its widest point. The climate boasts a long and gentle growing season, perfect conditions for growing the cool-climate grape varieties for which Oregon is best known. More than 80% of Oregon’s Pinot noir is produced in the Willamette Valley.

About the Willamette Valley Wineries Association: The WVWA is a non-profit industry association dedicated to achieving recognition for Oregon’s acclaimed Willamette Valley as a premier Pinot noir-producing region. Currently, the WVWA has more than 220 members throughout the Willamette Valley region from Portland to Eugene. The association organizes Memorial Day Weekend and Wine Country Thanksgiving, the two largest wine touring events in the region each year, as well as the popular Pinot in the City road show series. The WVWA also publishes an annual guide to wineries with a touring map. For more information, please visit willamettewines.com, call 503-646-2985, or follow on Twitter @wvwines and on Facebook.