Tiny Travels: The wine country detective gets the dirt on Terroir | Visit McMinnville
Skip to content 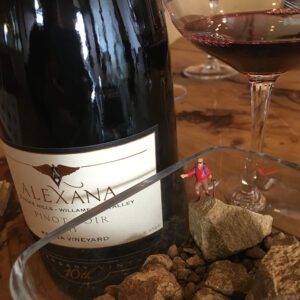 There are some searches that take over a man. Some ideas that grab him by the neck and don’t let go. For me, it’s always been that elusive culprit that goes by the street name of Terroir. He’s there lurking in the diurnal shifts of cold evenings and hot days, always just out of grasp, always hiding in plain sight.

I finally get a break in the case Thursday morning. My sources are pointing fingers at Alexana Winery, up in a little valley straddling the Red Hills and the Yamhill-Carlton AVA just northwest of McMinnville. Word has it they have more Oregon soil types up there than any other wine joint in the state.

I make an appointment. Better to give them a head’s up, let ‘em know I’m coming.

Right away I know they have something to hide. The winery’s tucked into a deep cut in the hill, something of the grapes and rolling landscapes to distract you on either side, pretty promises to divert me on my track. But I’ve been in this business long enough to spot a pretty lady’s secret motives, whether she’s got legs or just landscapes, and I won’t be deterred.

I park the car in a gravel lot and head in.

It’s all set up for fun and games: Wine bar near the left, group tasting room to the right, production facilities at the back end. The bar itself is Plexiglas covering contrasting lines of dirt in undulating stripes.

Winemaker Bryan Weil is my way in. He’s one of the new crop of cool kid winemakers up on Worden Hill, planting grapes where no one thought they would grow.  He’s telling me a story about where we are: On this collision pattern between two AVAs.

It’s the soils I’ve come for. We’ve got the usual suspects again, but the crime ring seems to have grown here.  Jory. Willakenzie. Sitton. Yamhill. Hazelair. Gelderman. Goodin. Some guy named Witzel. There’s 18 of them in all, every one of them with his own foibles.

We’ve got profiles on all of them.

“There are a lot of spices in the spice box,” Weil tells me. He pulls up a chair.

Weil brings out two wines he describes as siblings. They’re part of the winery’s soil series, single blocks he keeps separate before blending.

We do that with our suspects back at the clink, too, keep ‘em separate, isolate ‘em, learn their tricks.

The first is the 2015 East Block Pinot Noir, roots dug down into volcanic soils.

I taste it. I’ve got a nose for this stuff, and it’s right there: spicy, with currants and vanilla. She’s got soft, plus tannins. She’s like a lady baking a pie in heels.

Then the 2015 West Block. The brother. Bolder and richer without bitterness. His roots reach down in the sedimentary soils.

When I’m being nosy I find some black tea, cinnamon, a touch of red fruits but it goes down slightly tart, clovey. He’s like a tea butler who slipped you some tart from the kitchen.

Same grapes, different soils, two wines, related but distinct. Terroir has his fingers in it all.

I prefer the lady, but I can’t let personal inclinations get in the way.

In the end, all detectives have the one who slips away. The search never ends.

Weil may be right. The story I may be writing here is the story of my own palate. Every new patch of dirt sets a course of where to go next.