Tiny Travels: Put a bird (or several) on it at this great winery | Visit McMinnville
Skip to content

Most visitors head straight for the tasting room at Winter’s Hill Estate Winery, a boutique family operation set in a protected hill deep in the Red Hills viticulture area. But today, I’m headed with owner Emily Gladhart past the din and churn of a just-started harvest into the woods: A native oak savanna flush with native species of plants and birds.

“It’s the responsibility of anybody who has a place like this to remember that people aren’t the only beings on this planet,” Gladhart said as she bent to inspect a leaf.

Winter’s Hill, an official stop on the Willamette Valley Birding Trail, is one of a collection of sites across the valley welcoming birders, 10 of them in the so-called Yamhill Loop in and around wine country.  All in all, Oregon has 507 different species, about half of all North American birds.  Its location on the Pacific Flyway, a major path for migratory birds, make it a destination for all who seek the Sooty Fox Sparrow, the Chestnut-backed Chickadee, the White-tailed Kite, the Bushtit, and anything else that goes tweet in the morn.

Think of the trail as a series of bird retreat centers, way-tops between the fields, highways and cities, everything these birds need for sanctuary while getting where they need to go. 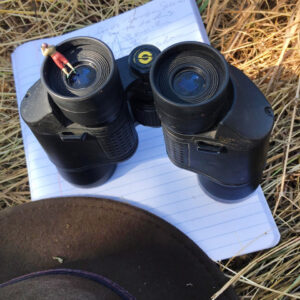 These first few weeks of autumn – mid-September through early October – offer the last chance for bird-loving looky-loos to grab their binocs in search of neotropical songbirds (those that migrate to the tropics of Central America), like the Western tanager and multi-hued warblers, according to Joel Geier, coordinator of the Willamette Valley Birding Trail.

The trail at Winter’s Hill is also one of the only ones where you can bird and go wine-tasting at the same time.  There, the Gladharts have replanted native prairie grasses—think Roemer’s Fescue, Forbs, and bunch grass – that lead to the oak savanna trail. At one time, Douglas Firs towered over the oaks, giving them none of the conditions they needed to thrive. But with a little trimming under the Gladhart’s stewardship, the savanna is returning to its native character.

We walk down the path, where ground birds tweet in the thimbleberry. Acorn woodpeckers peck in the treetops. Ripe yellow plums, also a native, grow heavy on bushes lining the trail. Now and then, a clump of coyote scat speaks to a different kind of wildlife. Somewhere in the distance a Towhee calls out its short-long cry.

“These woods are just beginning to have some character,” Gladhart said.

It’s the loveliest of walks, far from the sounds of Hwy 99W, a sanctuary of sorts set in the classic Jory soil so beloved to area winemakers, and it ends at a spot overlooking the estate’s vineyards, towards Mt. Hood.

We pass a hidden glen of beehives on the way back up the hill to the tasting room as a red-tailed hawk surveys the grasslands folded over the hill.

Back at the tasting room, we try the vineyard’s full flight of Rosé, its outstanding, award-winning Pinot noir releases, and sticky sweet Eiswein. It strikes me that this is the closest I’ve ever come to truly experiencing terroir – that tricky winemaking term describing the sense of a place alive in the wine. Here, it cannot, and should not, be ignored.