Tiny Travels: In Oregon’s foodie capital, second is the best place to be | Visit McMinnville
Skip to content 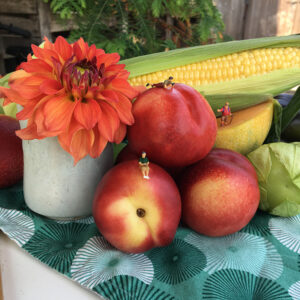 When I read on my computer screen that Bounty of the County, Susan Sokol Blosser’s fundraiser for the Yamhill Enrichment Society, got named second best general food festival in the United States, I cheered. I texted all my friends. I ran outside to tell my husband.

Was I thrilled to see an event staged by an organization that raises money for books for babies, Dolly Parton’s Imagination Library, music enrichment, sustainable food systems, women’s leaders and living history ranked so high in the national debate?

But my full-body hurrah emerged from a place you can only come to by paying attention. For I have been cataloguing all the ways my hometown comes in second best.

First, it was Bon Appetit magazine, whose food editor Andrew Knowlton named the town the “Second Foodiest Town in America” based on how seriously our chefs take the challenge of working with local bounties and the exceptional quality of our farmers, restaurants and – ahem – eaters.

Then there was the much-heralded Parade magazine award for “2nd Best Main Street in America,” which lauded the town for things you can experience – it  laid-back vibe and great strolling street – as well as indicators of a healthy place like its high occupancy rate for local businesses.

Then there was Sunset magazine, whose editors listed McMinnville 2nd on a spread of “Most Livable Towns in the West” (whether the list was ranked is TBD, but I like to think graphic placement suggests a hierarchy).

Honestly, I can’t get enough of second best.

Second best means being gracious for the efforts it took many to get you to this point.

Second best means seeing all that must happen between you and first place.

Second best means realizing that there really is no first place.

More than anything, second best means understanding that great harvests, whether you’re talking about food or places, require a shared vision, an open table, a viable and inspirational plan, hard work and hope.

Clearly there is nothing truly second best about the Bounty of the County. I’ve been to the wine dinner – a magical evening on the lawn behind the instantly compelling Sokol Blosser tasting room featuring a Who’s Who of the county’s food scene. If you love food and you love this place, you’ll know the players here: Valley Commissary, the Diner, Tina’s, Thistle, Pura Vida, Nick’s Italian Café, and more.

But, as second best goes, Bounty of the County just keeps getting better. The now three-day festival is stretching out into the county as befits the foundation’s name, adding hot air balloon adventures, several additional winery and food event, a river paddle led by Alder Creek Kayak, a wine dinner at Kookoolan Farms, and a horseback-riding event where Tennessee Walking Horses deposit you at wineries.

In other words, in Yamhill County, heavy is the head that wears the crown, but hopeful is the heart and full is the stomach that loves second best.